Note: This poster was accepted to be presented at the NORDES 2017 Conference in Oslo, Norway; however due to financial constraints and the lack of alternatives offered by the conference itself, the authors had to unfortunately withdraw their submission. We at Decolonising Design stand in solidarity with their effort, and are honoured to publish their contribution in our platform.

You can view/download the original poster (.jpg) by clicking here, or read it below.

This poster aims at presenting and explaining the graphic design project imagined to present an immersive practice-based research mission run to investigate Gynepunk, a DITO/DIWO-based [1] healthcare project, reclaiming the decolonization of gynecology. This project is run in the catalan third-place (Oldenburg, 1989; Burret, 2017) [2] CaLaFou.

The results of this year-long experiment were exhibited during the Biennale Internationale Design 2017, as the Fork The World exhibition (fig.1).

Presenting the Gynepunk project in this context raised issues that the authors tried to outline and fix through visual design, among which: 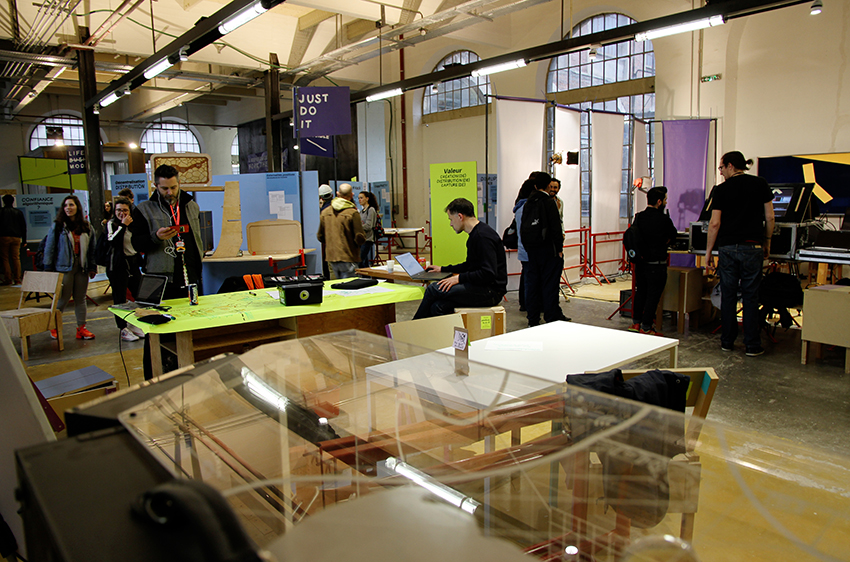 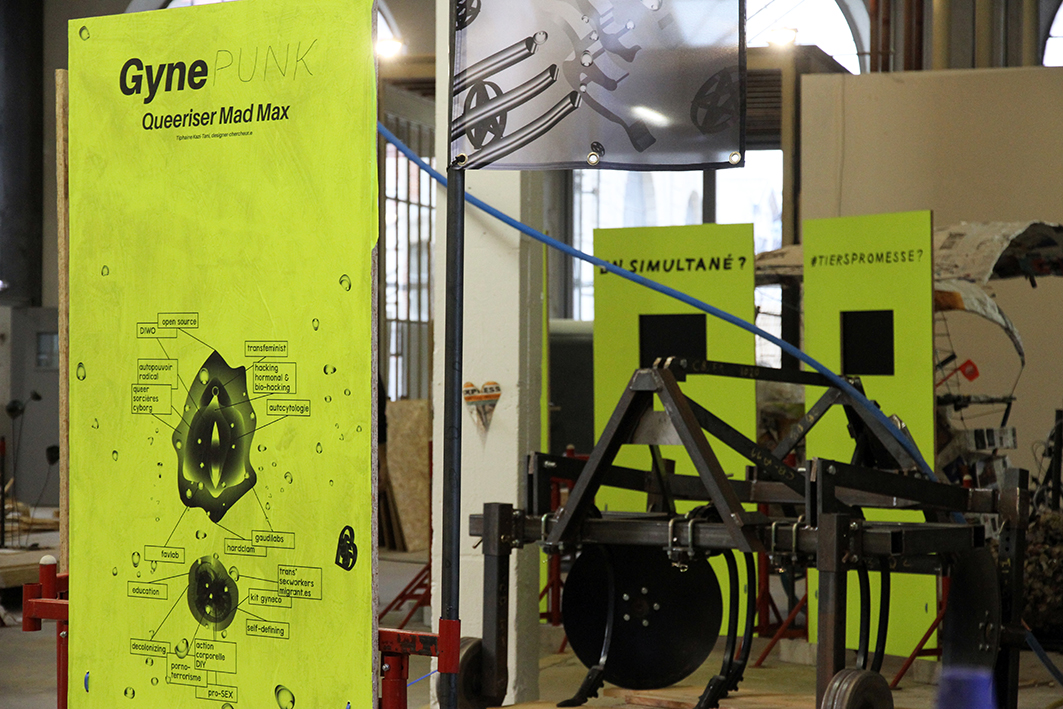 As the immersive investigation was getting planned, Gynepunk (fig. 2) was considered then as a well-defined project, related to well-identified issues and actors. In fact, the on-site research, revealed that Gynepunk was more a shoot of rhizomatic projects, individuals, actions and researches indifferently spreading as performances, transfeminist (h)ac(k)tivisim, healthcare workshops, DIY practices, online open resources, etc. The polymorphic group finally revealed a structure almost impossible to grasp, diversely and indifferently based on the monitoring of the polluted river, the culture of bacterias extracted from their bodily fluids, the thorough documentation of a counter-history of gynecology, various hacks and biohacks (including the synthesis of oestrogen out of the near polluted waters), etc. (fig. 3)
While the research offered a far more thought-provoking result than expected, the next difficulty was to stay faithful to it, while endorsing the global requirements of the exhibition. 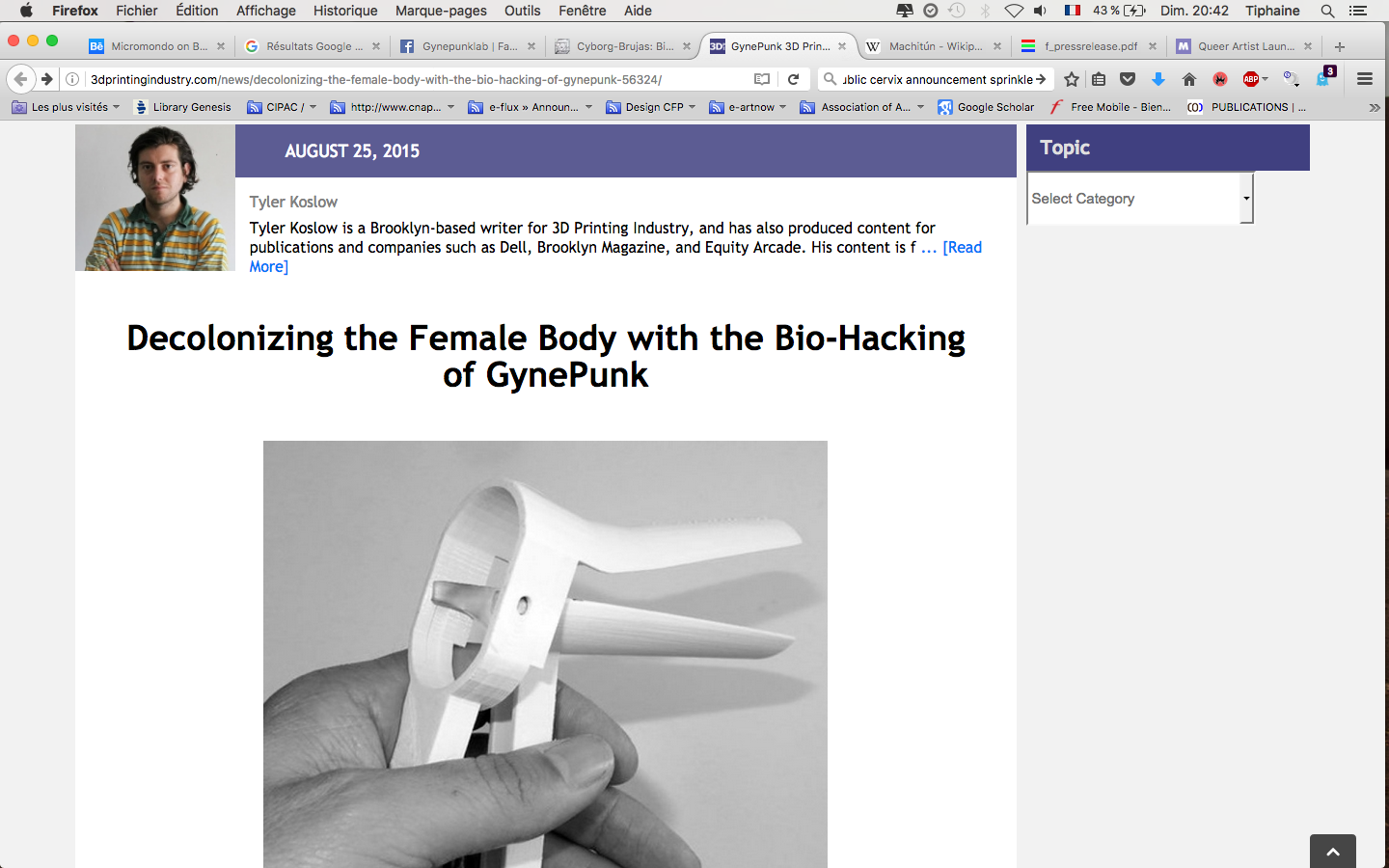 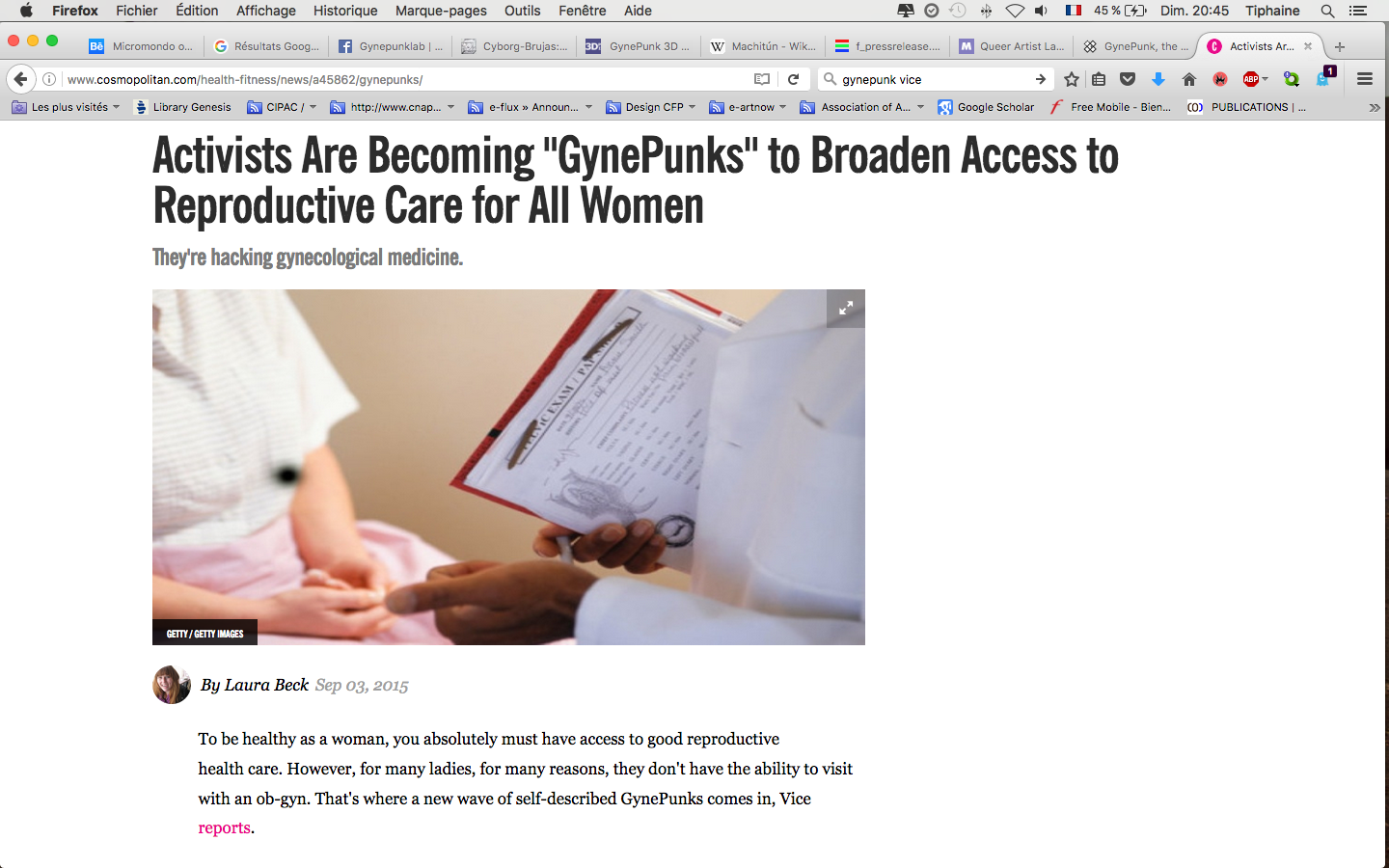 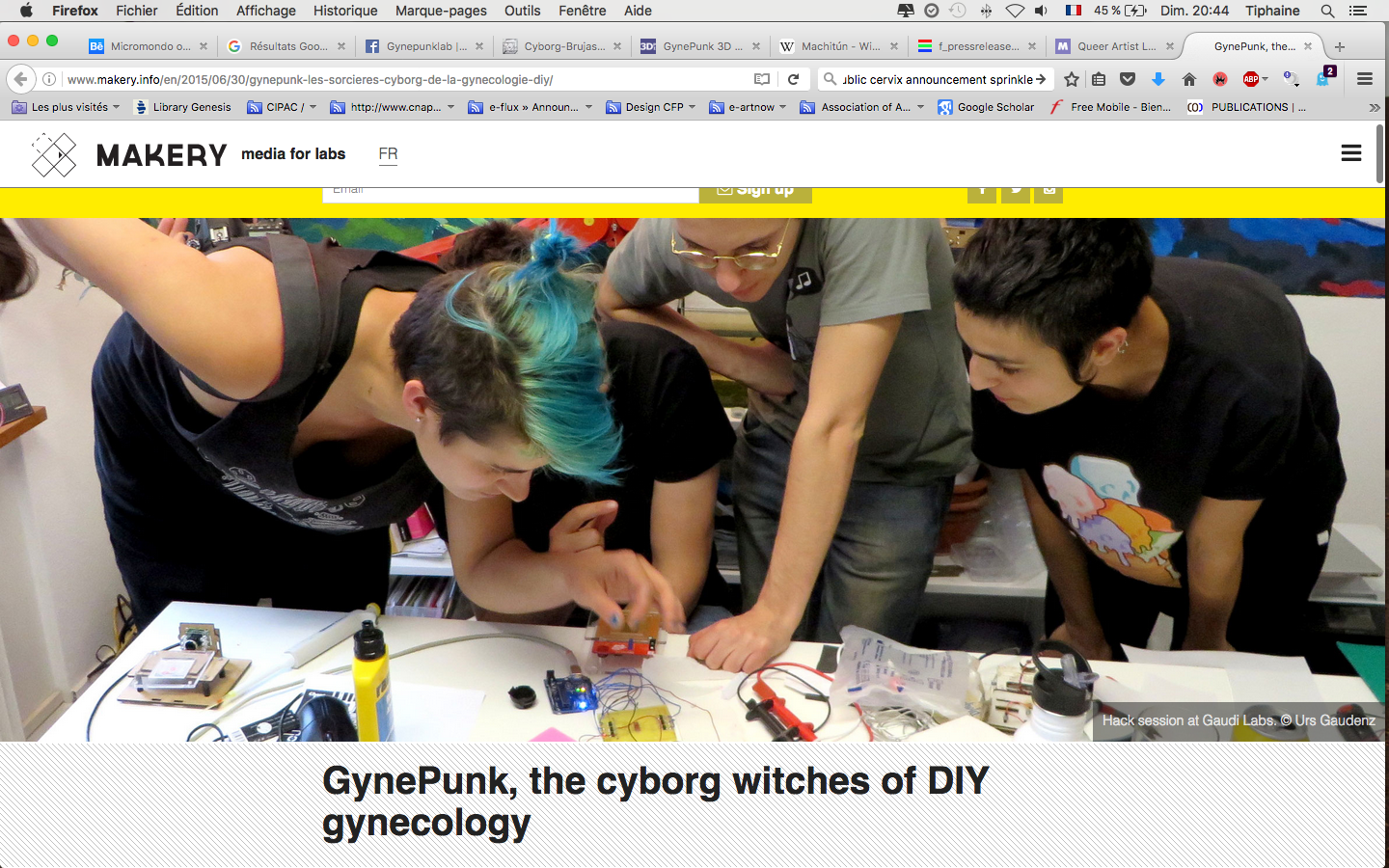 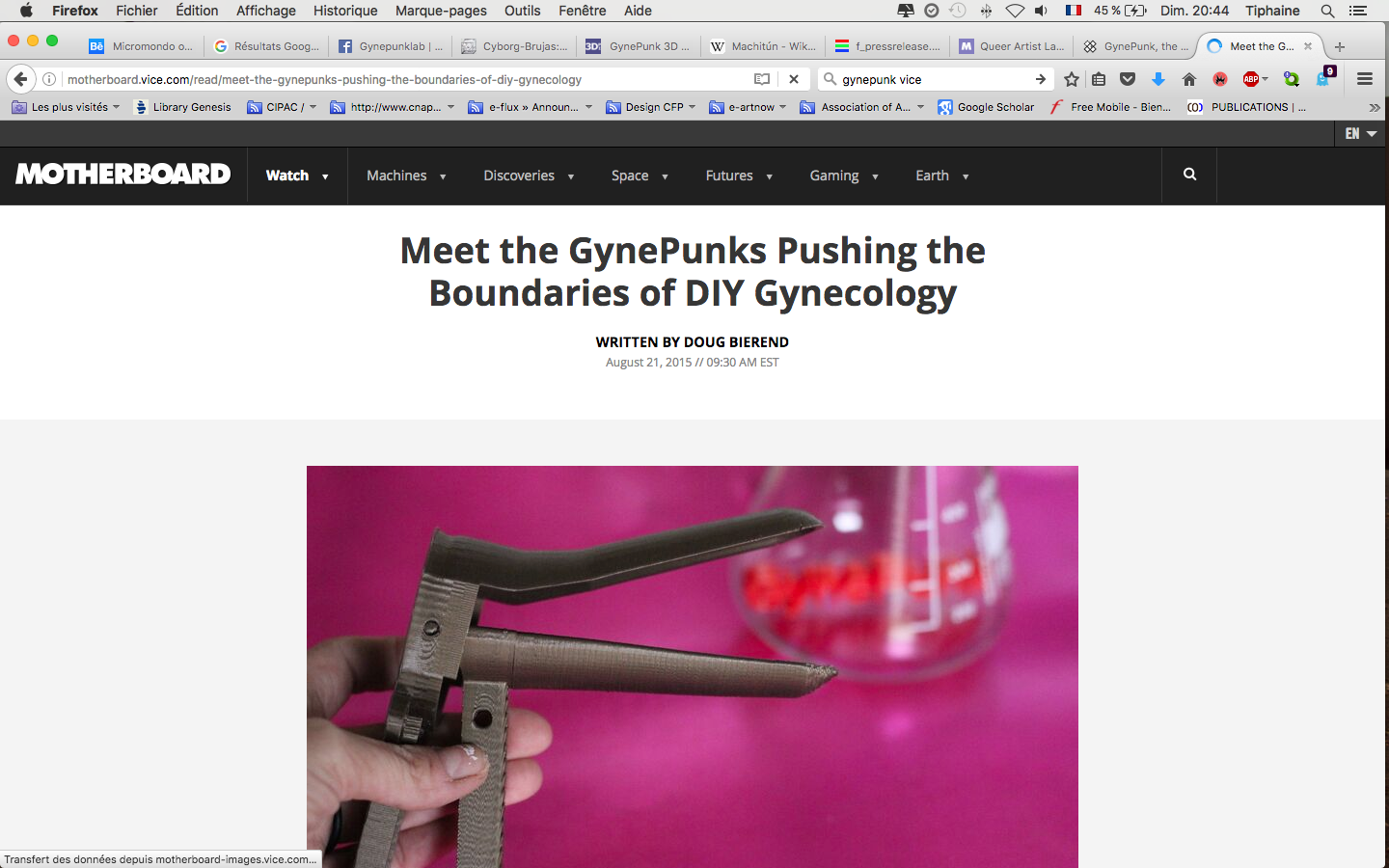 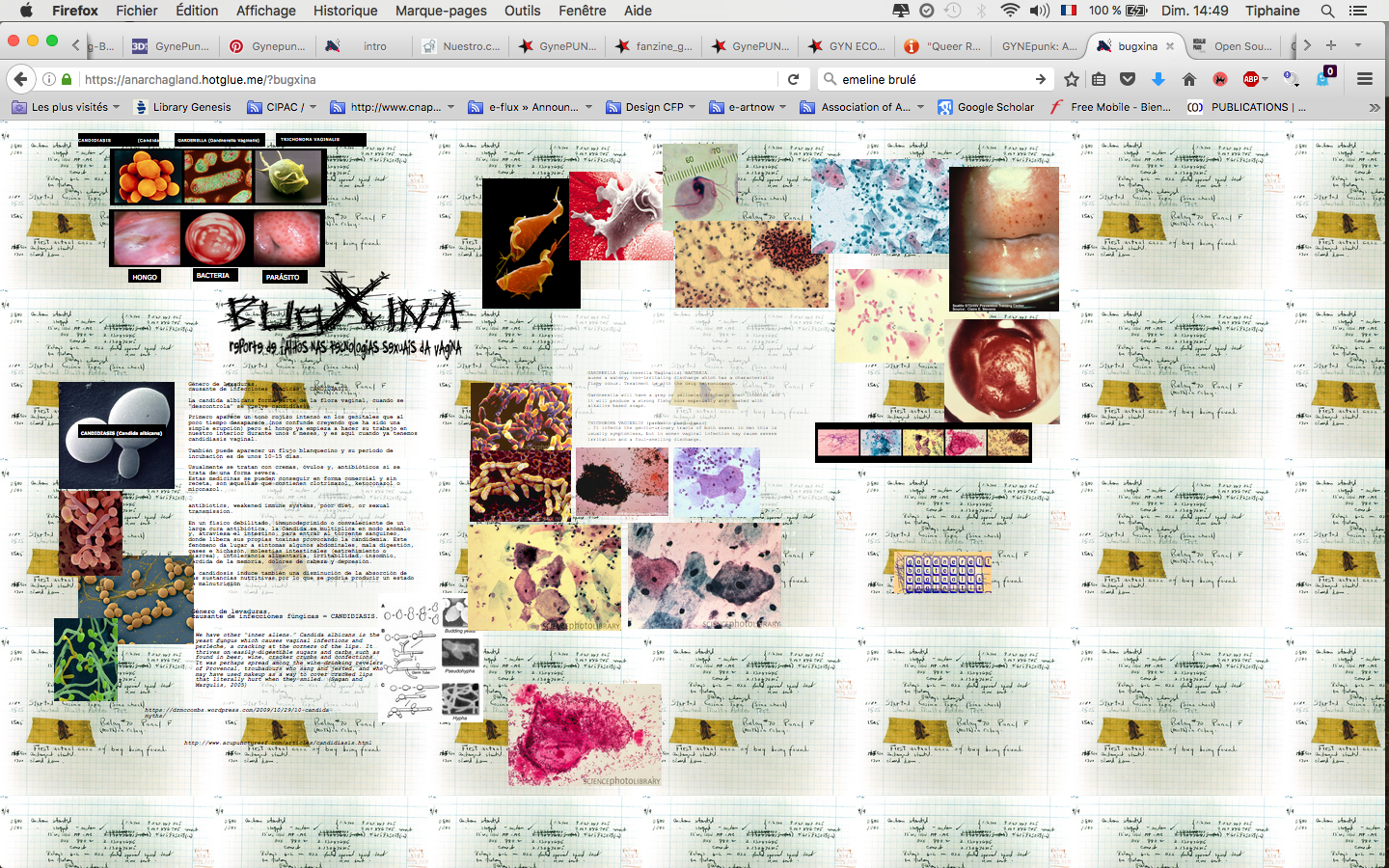 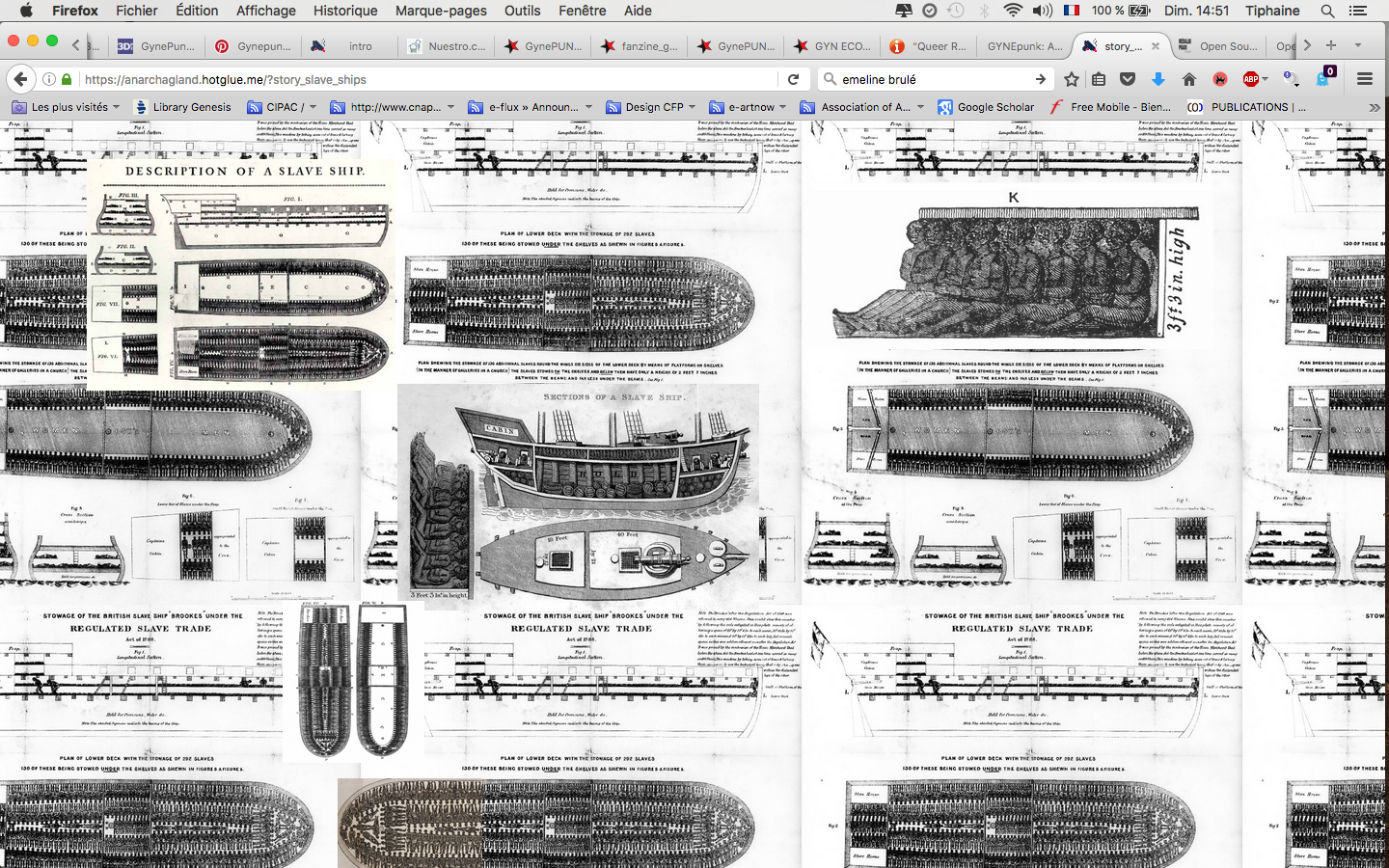 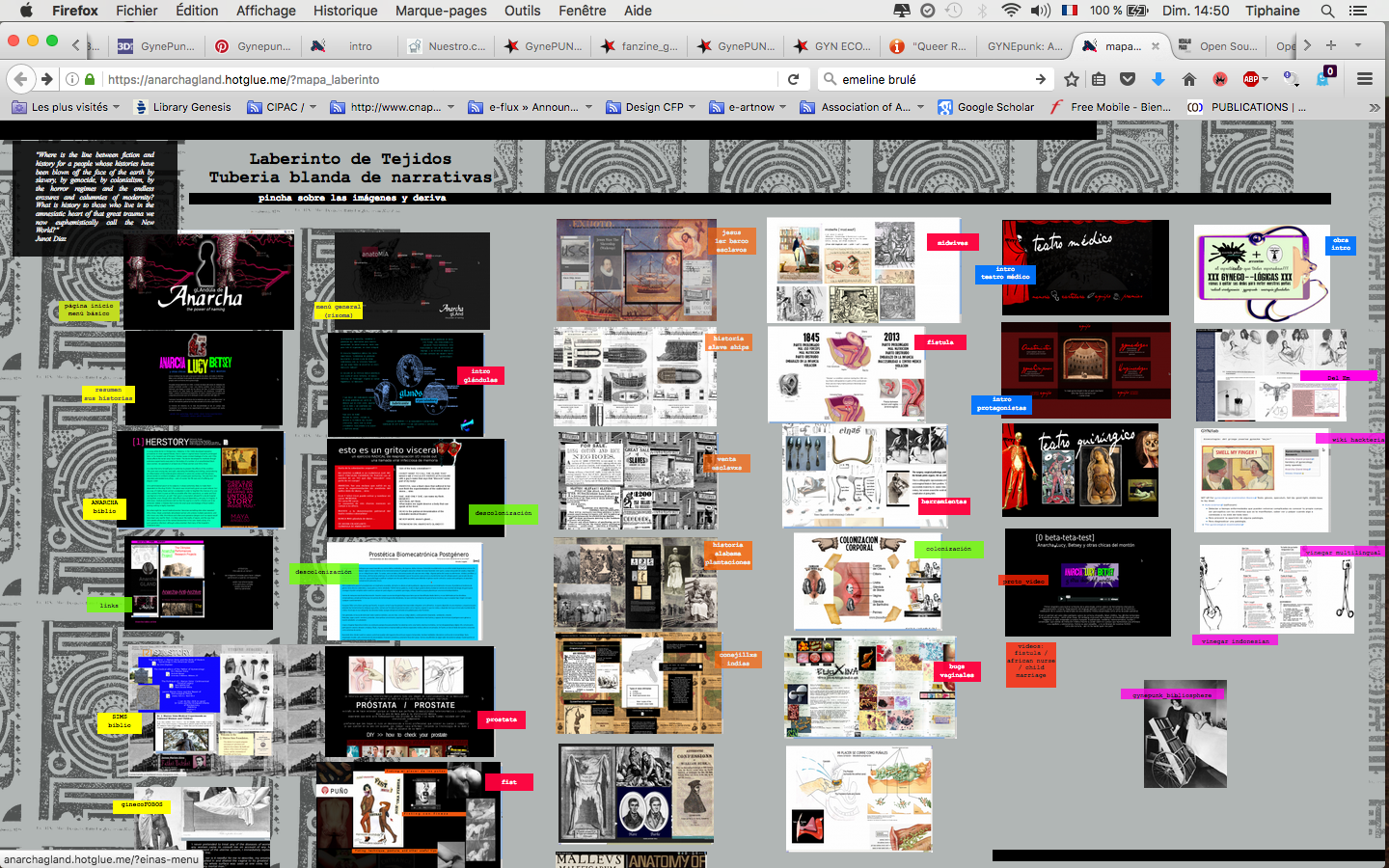 Considering the generic requirements for the exhibition (fig. 4), eg. not only technical specifications but also a certain amount of textual contents describing the place and the project, proposing keywords and and a key text, and one or two open-source objects embodying the project, the researcher felt a lack. To her, limiting the representation to a queerpunk manifesto, a 3D printed speculum and a bottle of vinegar [3] seemed reductive and trivial. Considering that « all politics commands an aesthetic attention because it is only through an aesthetic attunement to that which appears that the spectators can come to terms with the unique forms of value-creation disclosed in the moment of an action » (Panagia, 2014), she associated with a graphic designer self-identified as a transfeminist activist. [4] They would then be able to explore the hidden layers of the research with shapes rather than words, and also positively disrupt the exhibition continuum on a granular level. 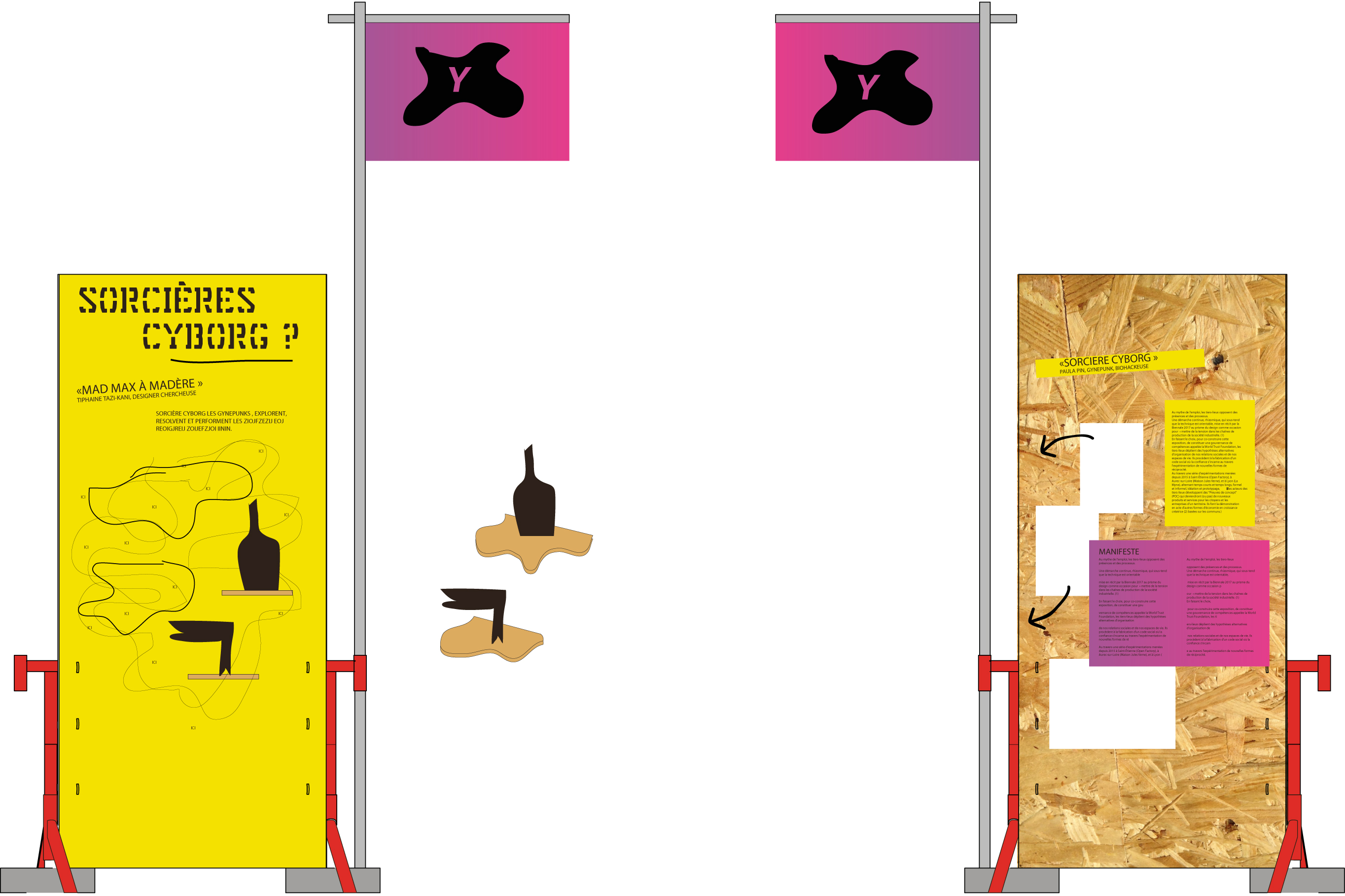 4/ Conclusion: the aesthetics of politics

Engaging with graphic design helped the emergence of implicit yet crucial contents and issues. The polluted river and hybrid algae as a metaphor for mutating identities emerged in a constellation of floating shapes inspired by plants, bacterias and female genitalia (fig. 5). The normative organization of the anatomical chart was used to map a transfeminist agenda, while the raw yet geometrical layout design of the Gynepunk manifesto imposed its visual and conceptual boldness to the visitors (fig.6). As the visual language created by the designer was also a sort of displacement and reassemblage of her own formal vocabulary, she initiated a graphic attempt to extend a political community by spreading, sharing and extending the use of her designs (fig.7). In the end, by disrupting locally the unified scenography, the designer and the researcher designed a visual queer space that literally forked the exhibition, cohering the collective engagement through individual disruption (fig.8). 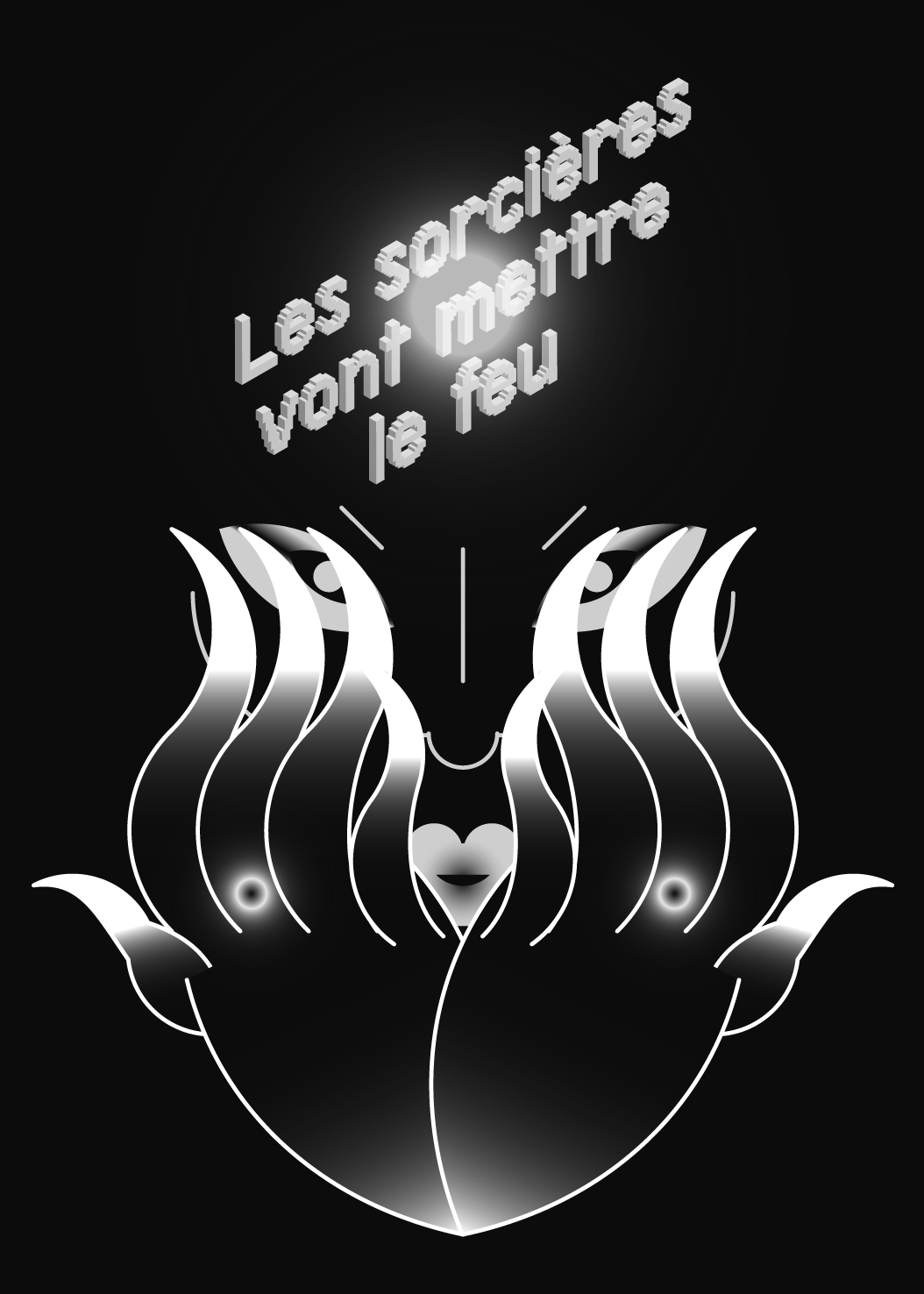 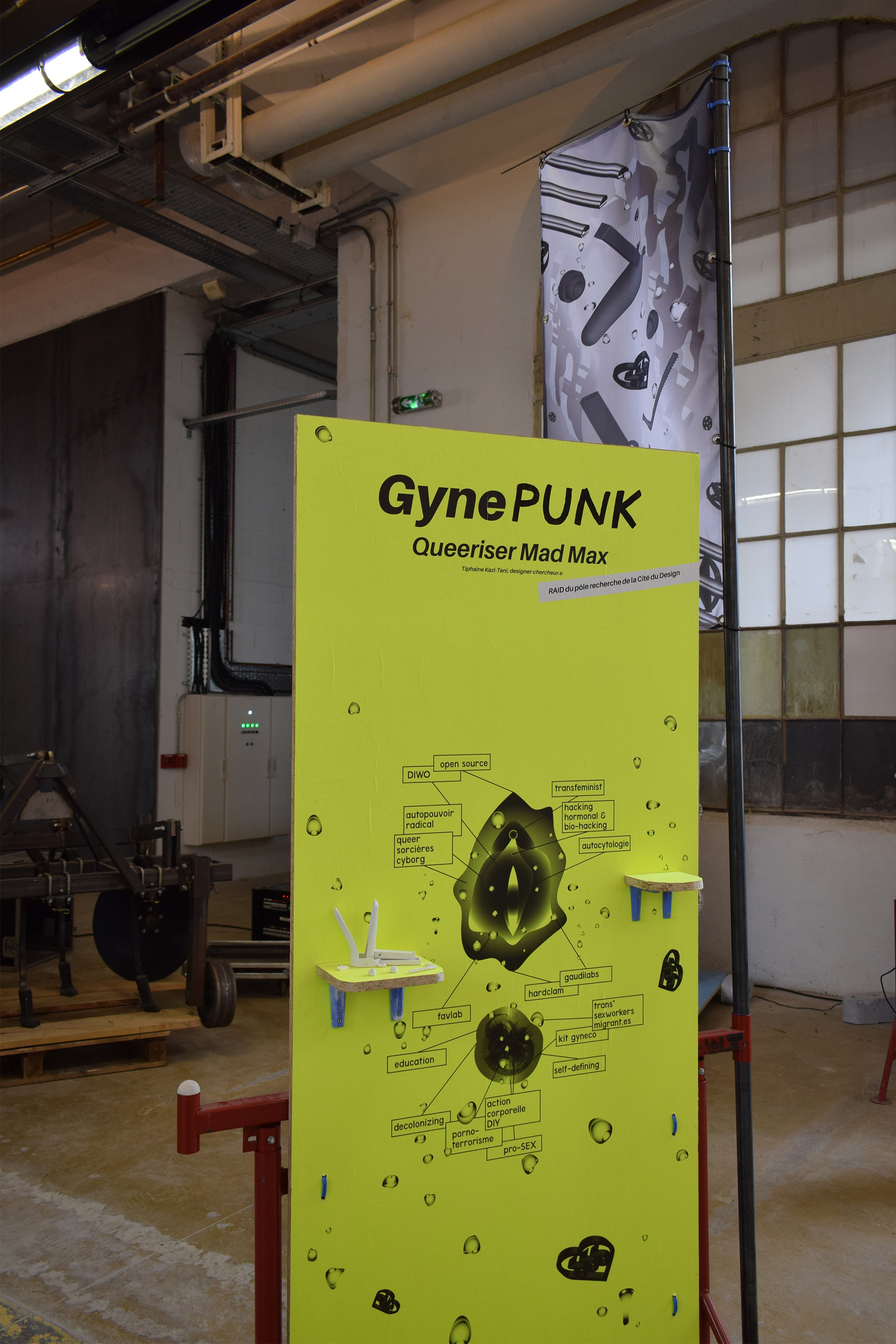 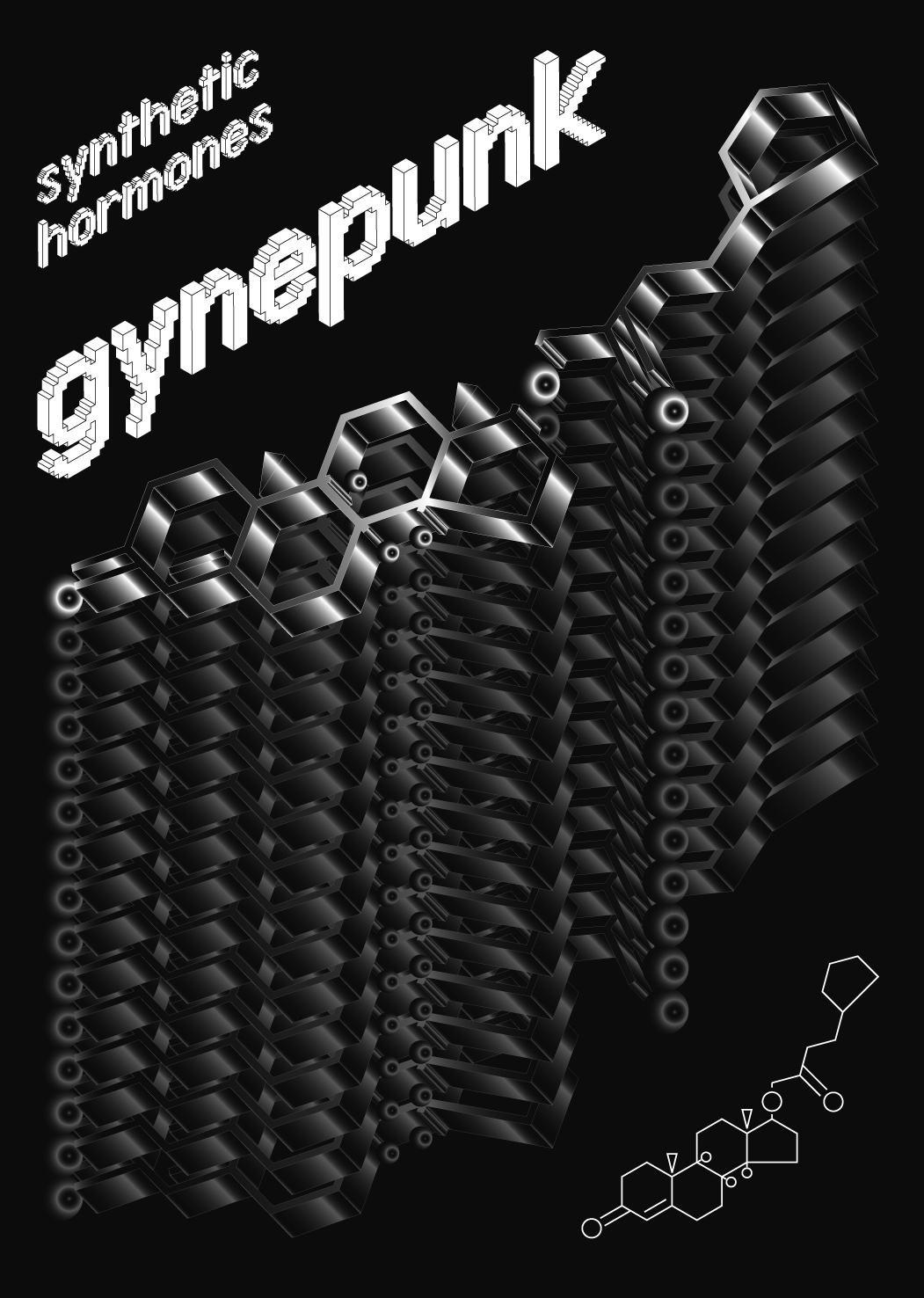 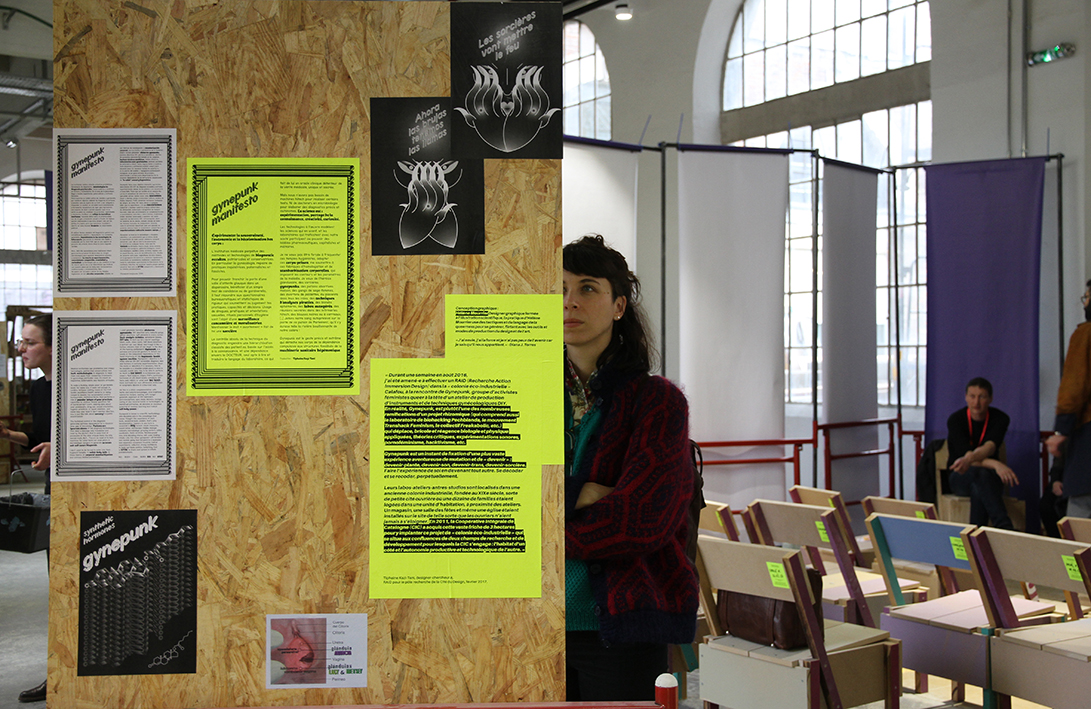 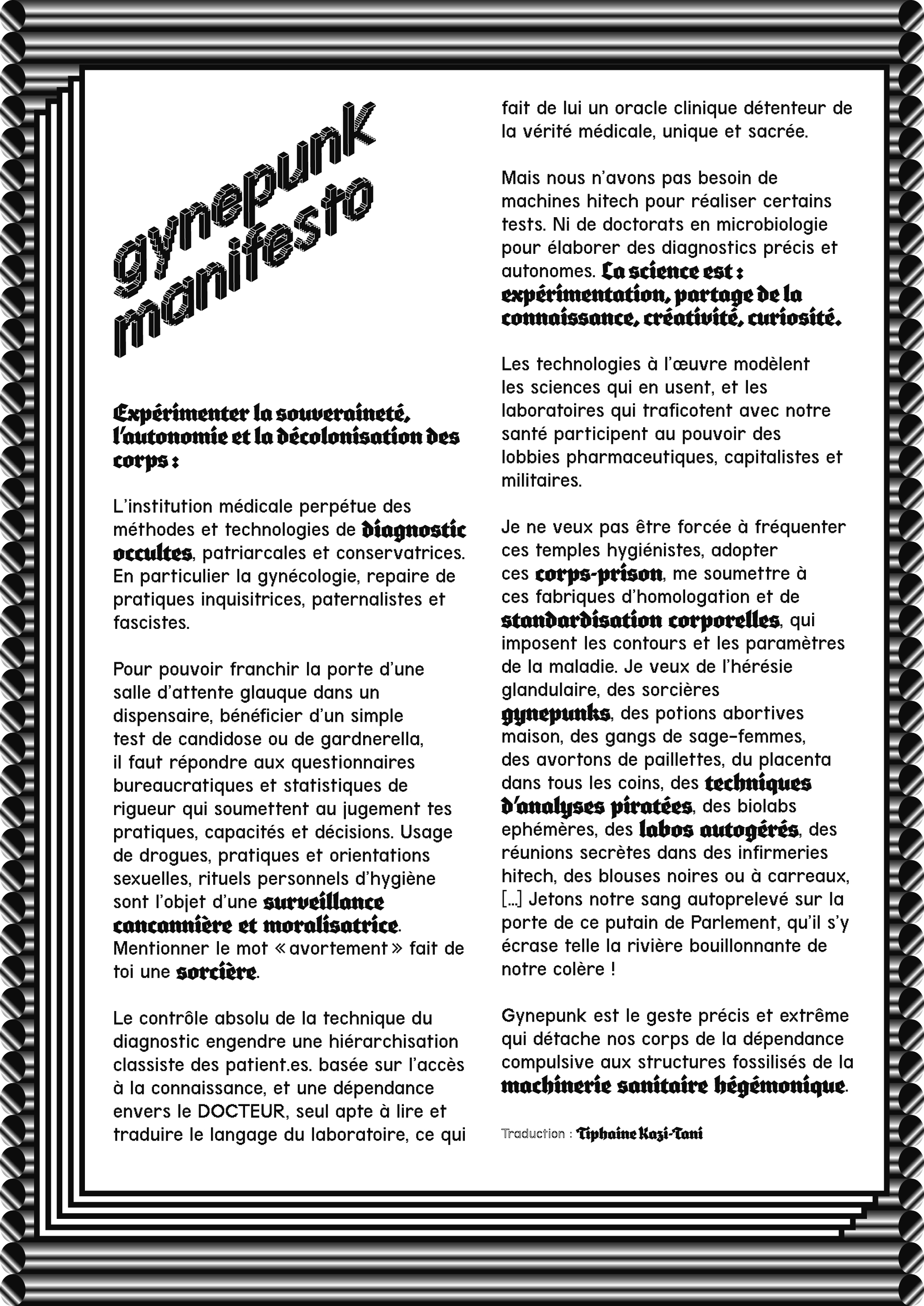 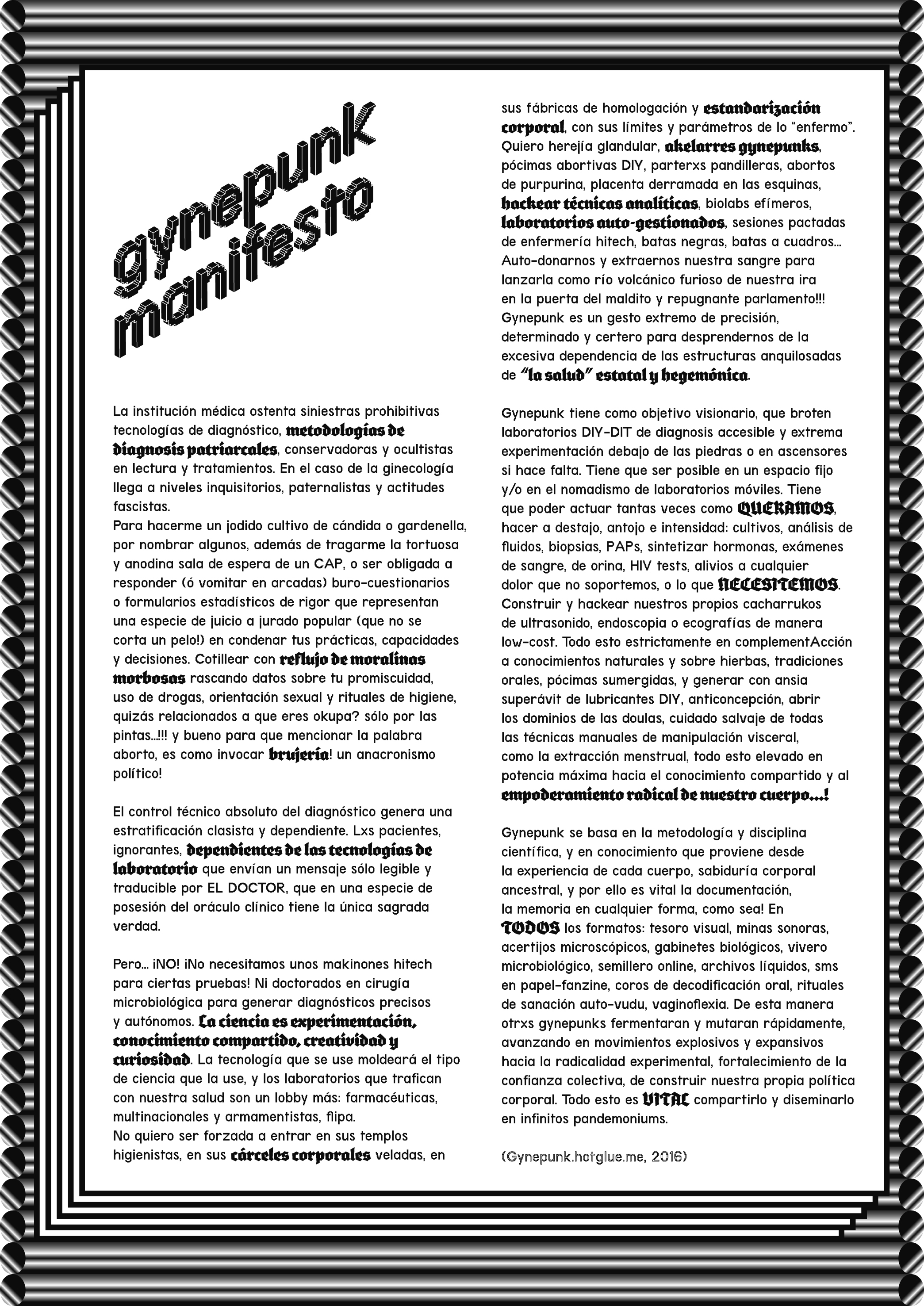 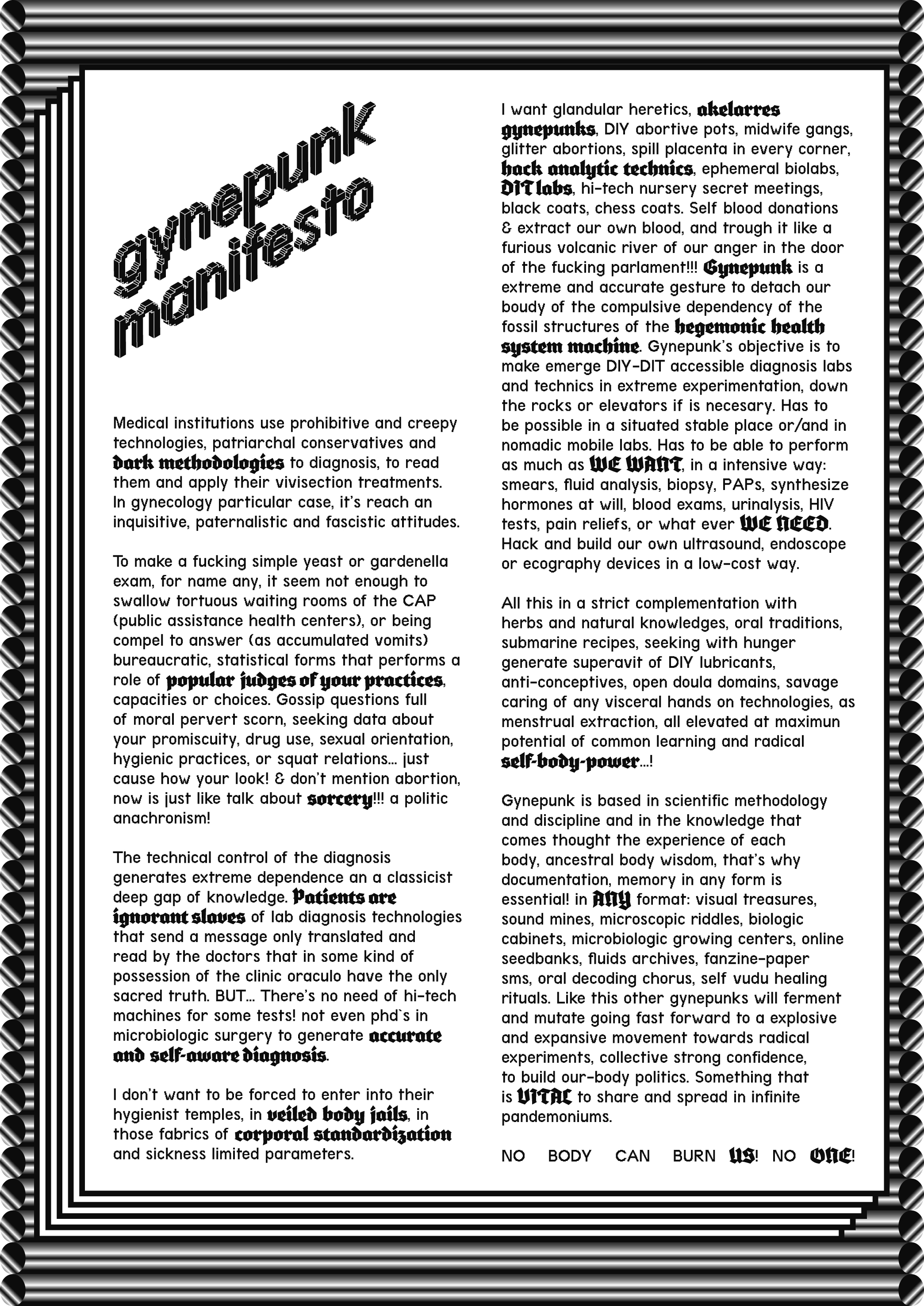 View all posts by decolonisingdesign